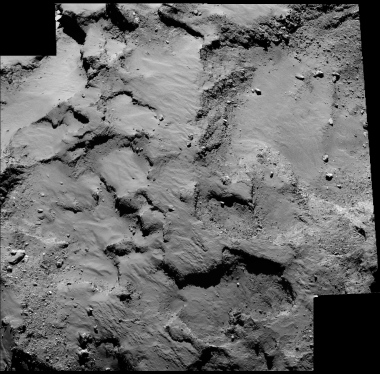 On 6 August 2014, the Rosetta mission achieved a significant milestone by becoming the first mission to rendezvous with a comet. During the coming months, Rosetta will orbit the comet, deploy the Philae lander and accompany the comet through perihelion (August 2015) until the nominal end of the mission. During its 10 year journey towards comet 67P/Churyumov-Gerasimenko, the spacecraft has passed by two asteroids: 2867 Steins (in 2008) and 21 Lutetia (in 2010). The spacecraft entered deep-space hibernation mode in June 2011, and ‘woke up’ on 20 January 2014. 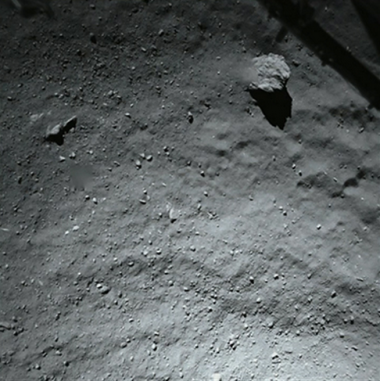 The comet seen by Philae from 40 metres above the surface. ESA/Rosetta/Philae/ROLIS/DLR

Touchdown was confirmed at ESA’s Space Operations Centre in Darmstadt, Germany at 16:03 GMT/17:03 CET on 12 November. Studying the first data returned from the lander, revealed the astonishing conclusion that the lander did not just touch down on Comet 67P/Churyumov–Gerasimenko once, but three times. 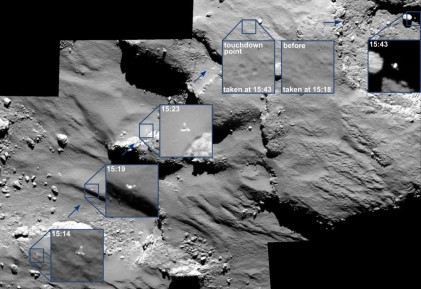 The mosaic comprises a series of images captured by Rosetta’s OSIRIS camera over a 30 minute period spanning the first touchdown. The time of each of image is marked on the corresponding insets and is in GMT. A comparison of the touchdown area shortly before and after first contact with the surface is also provided.

The images were taken with Rosetta’s OSIRIS narrow-angle camera when the spacecraft was 17.5 km from the comet centre, or roughly 15.5 km from the surface. They have a resolution of 28 cm/pixel and the enlarged inserts are 17 x 17 m.

Above images and information obtained from ESA web site.

A fantastic achievement: I wonder what discoveries are going to be made in the coming months ?

This is as important as watching the first moon landings. I still have lots of news clippings & magazine articles, not to mention that famous Earth image. I could never have believed that a mission landing an object on a comet would be achieved in my lifetime. Moore’s Law has a lot to answer for  🙂