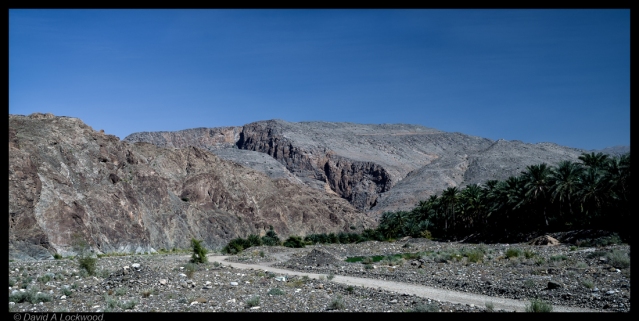 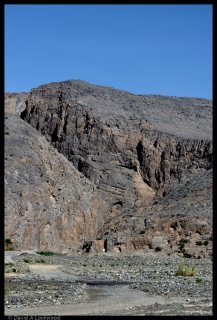 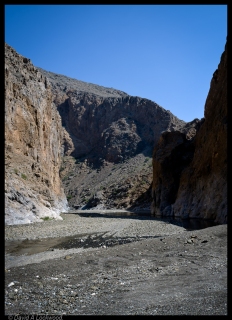 Dima wa’Tayeen in the Sharqiya region, will take you to Wadi Tayeen and at Ghubrat at Tam, the Wadi takes a dramatic turn in a breach of the Jebel Aswad range (The Devil’s Gap) from here it takes the name Wadi Dayqah.

Note: Mariners called the sea end The Devil’s Gap but it is now generally known by this name at the Wadi Tayeen end as well.

The town of Ghubra el Tam (sic) is very picturesquely situated on the skirt of an eminence, which, lying at the end of the valley and thus forming a barrier against the onward progress of the stream, has caused it to swerve to the northward and cut its way through the mountain range down to the sea. It has some good houses and a population of over a thousand of the Siâbiyin tribe, and is protected by a strong fort of oblong shape perched on the western extremity of the hill.
At this time there was very little water in the wadi, the unusual dryness of its bed being due to the severe and long-continued drought, from which this part of Oman had been suffering, and our party were congratulating themselves on having arrived at such an opportune time for passing through the gorge, when their joy was suddenly turned into dismay by a slight shower of rain which fell in the evening. The clouds now began to gather so ominously in the sky, that if it had not been so late I should have pushed on at once without halting. It had, however, already become too dark to permit of this, and with some foreboding—for the intensity of the heat seemed to threaten a thunder storm—we took up our quarters for the night in the habitation our hosts the shaikhs of the town had allotted to us. Had it rained heavily, as many of us fully expected, I should have had to wait here until the torrent had subsided sufficiently to allow of our proceeding through the gap, which would undoubtedly have entailed a delay of several days.
The exploration of this caňon had been one of the main objects of my journey, as it had not before been traversed by a European, so I was resolved to seize the present chance of visiting it at all risks. Fortunately, the night passed without the expected downpour, and though the morning of the 16th broke gloomily and lowery, the rain still held off, and the stream flowing at our feet had risen but slightly. After a consultation, we deemed it best to face the peril of a sudden rush of water through the gorge, and hazard the passage before the storm, which now appeared inevitable, could burst upon us and unite the rills and streamlets of the valley into a swift and overwhelming torrent. having hastily loaded the camels, therefore, we started early, and crossed the bed of the wadi, in which the water was running a little over 2 feet deep, just opposite the town. We then found ourselves at once at the entrance of the great cleft, which is as sharp and abrupt as if we were entering the portals of some monstrous castle and stood immured within its massive walls. Towering loftily, sheer and perpendicular above the narrow floor, the huge walls of rock give the appearance as if the mountain range had been suddenly split in two from the base to the summit by some convulsion of nature, exhibiting a singular illustration of impressive grandeur. The breadth of the passage here is about 100 yards, but it varies throughout its length from 500 to 150 yards, while the cliffs rise to an altitude of from 1000 to 1500 feet, as near as I could judge. The stream appeared to flow 4 or 5 miles an hour, and gradually increases in volume as we progress, being fed by the springs of water which burst from the crevices in the walls. Throughout the chasm the camels were wading nearly up to their knees.
After riding along this grand and curious gallery for a quarter of a mile, we are told to dismount, having arrived at a sort of deep step or waterfall called the Akaba. Here the camels are relieved of their baggage and saddles, and are taken along a ledge of the precipice on the left bank which leads circuitously to the bed further on, while the men of our party are let down by a rope over the projection on to the floor of the wadi below. This remarkable stop or fall in the rock offered a very serious impediment, as it was of considerable depth, while huge blocks and fragments of blue and white limestone, that had fallen from above, added lo the difficulty, and presented an obstacle which was absolutely insuperable to the camels, even when freed of their loads. The path leading to the fall, along which we had to scramble, was so rugged and slippery, and the cliff was so smooth and waterworn, that even the Arabs, who are as nimble as cats, did not find it easy work.
The solicitude evinced for my safety, not only by my own party, but also by the Siabiyin who had accompanied us from Ghubreh was almost touching, though the descent could not in fact be called perilous. Indeed, throughout my excursions in Oman, 1 always had reason to he grateful to the Arabs of my escort, and not infrequently to the local Arab shaikhs, for their zeal and self-sacrifice on my behalf. They never resented the inconvenience and fatigue 1 often caused them, but deferred without question to my wishes as to the when and the whither; while on any occasion of unusual toil or danger, they seemed to regard my safety and comfort as a main point of consideration.
At the bottom of this pass, called Al Makuba by our Siabiyin guides, we waited an hour for the camels, which, though carefully led by the drivers, did not traverse the narrow and dangerous ledge on the other hank without serious difficulty and hazard. Fortunately, however, they arrived at last in safety, and the baggage, which had in the mean time been lowered down by the Arabs, having been replaced, we mounted and resumed our journey.

“we are told to dismount, having arrived at a sort of deep step or waterfall called the Akaba.”

Extracts from:
THE COUNTRIES AND TRIBES
OF THE PERSIAN GULF.
Pub: 1919 by COLONEL S. B. MILES

Al-Sharkiya, as its name implies, denotes the most easterly province of Oman, and is bounded on two sides by the sea, on the south-west by the desert, and divided from Oman Proper by the hill range, as described above. It is mountainous to the north along the coast, the highest peak being Sohtari, which rises over 6,000 feet,and to the south-west it is more level, more fertile, and more populous.
The northern part of Al-Sharkiya is drained by the Wady Tyeen, which flows into the Gulf of Oman, while in the south the watershed throws off four streams, Ethli, Andan, Halfam, and Kalbuh, all of which unite in one and discharge into a creek a little to the east of Mahot in the Bahr al-Hadhri. This province includes three or four luxuriant and well-watered districts, the Tyeen Valley, Jaalan, Bediyeh and by some Semed al-Shan.
The first of these is a perennial and important stream occupied by more than thirty villages, and after cutting a deep chasm through the hills known to mariners as the Devil’s Gap, reaches the sea at Dagmar, east of Kuriyat.
The great valley called by the Arabs Wady Thaika, or Hail Ghaf, and known to Europeans as the ” Devil’s Gap,” a narrow cafion cut through the hills by the water of the Wady Tyeen ; the bluff on the northern side of the gap is called Nuwai, while that on the southern is called Naab.