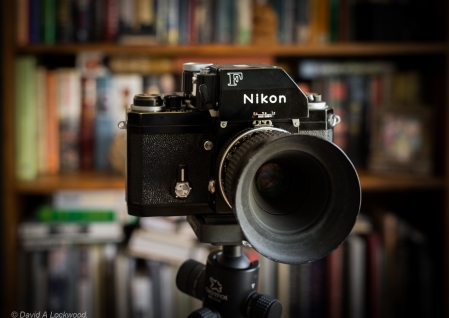 Ignoring the fact that I have more cameras than any sensible person should have – I have acquired a  1973 Nikon F (S/no says manufactured between JUL 1973 to SEP 1973) with an FTn finder.
Wanted one of these cameras for years, but would not (could not) justify the prices being asked – but this was a sensible price and more importantly, in good condition & with a working meter system: not bad for a camera nearly 43 years old !  Thanks Freyja  🙂

The only thing I found was that the meter seemed to be about one & a half  stops out, but consistently over many different ‘f’ & ASA settings: which meant the ring resistor was probably just dirty. Or it had been modified to take the modern equivalent of a 1.35volt mercury battery (several methods available – all unknown on a newly acquired camera) suspicion aroused because it contained two mercury batteries that still indicated 1.3volts; how old were these I ask myself….. especially as they have been unobtainable for years.

As rumour has it that I am an electronics engineer, one of these heads should not be outside my capabilities for cleaning and minor adjustment; given the right documentation (find out were the access screws are hidden !!! ) under the top leatherette as it happens.

It turned out that at some point in time the battery-box  -lead wire had corroded and this being replaced along with some judicious application of Isopropyl alcohol  gave the whole thing a new lease of life, it now only reads about half a stop out compared to my Nikon D800.

17 thoughts on “My new friend – Nikon F with Ftn finder.”