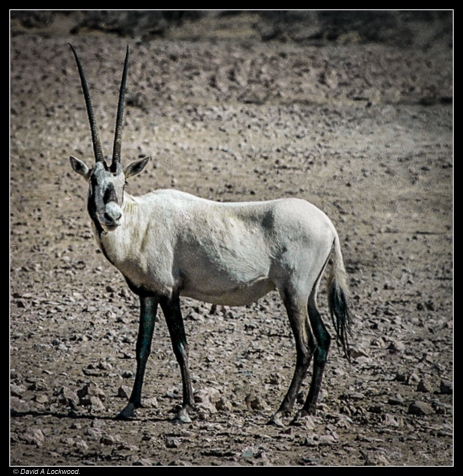 A Jpeg file that I have of the The Arabian Oryx or white Oryx (unfortunately I have not found the original negatives yet: I have about 20 in a folder that I have yet to scan and catalogue) this is from my files of  November 2010 when I was down in the Huquf.

The Unicorn myth: From that well know online encyclopædia.

The myth of the one-horned unicorn may be based on oryxes that have lost one horn. Aristotle and Pliny the Elder held that the oryx was the unicorn’s “prototype”. From certain angles, the oryx may seem to have one horn rather than two, and given that its horns are made from hollow bone that cannot be regrown, if an oryx were to lose one of its horns, for the rest of its life, it would have only one.

Another source for the concept may have originated from the translation of the Hebrew word re’em into Greek as μονόκερως, monokeros, in the Septuagint. In Psalm 22:21, the word karen, meaning horn, is written in singular. The Roman Catholic Vulgata and the Douay-Rheims Bible translated re’em as rhinoceros; other translations are names for a wild bull, wild oxen, buffalo, or gaur, but in some languages a word for unicorn is maintained. The Arabic translation alrim is the most correct choice etymologically, meaning ‘white oryx’.