Husn Al Heem (Nakhal Fort) The origins of which probably date to pre-Islamic times, the structure being continuously remodelled over the centuries; this included a substantial rebuild in the mid-seventeenth century. The present gateway and towers were apparently added about 1834 during the reign of imam Said bin Sultan.

It would seem debatable when Nakhal (or Nakhl ) had its first fort at this location, but there is growing evidence that there has been some sort of fortified structure on the rocky outcrop for a very long time. So it is not inconceivable that it was strengthened or remodelled during the Ya’aruba Dynasty.

The Ya’aruba Dynasty (1624 – 1744): Ya’aruba Imams introduced a period of renaissance in Oman’s fortunes both at home and abroad, by uniting the country and bringing it a great deal of prosperity. It was under the Ya’aruba dynasty that many of the imposing castles in Oman were built.

This is what some of the fort looked like before the substantial refurbishment was started in about 1990. 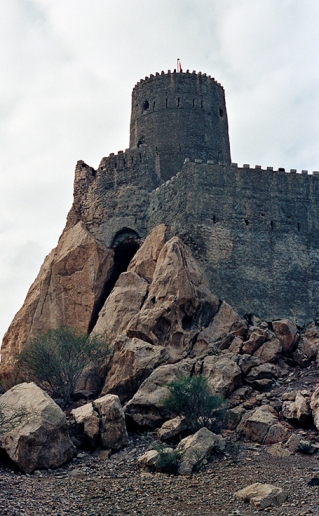 The above is made from a similar position to the one in the previous post – Traditional Omani Fort.

Unfortunately this has a slight colour cast in the sky: this is an old Kodak C41 negative processed by a local shop as I did not have the means to do it my self in those days.  could probably remove in Photoshop but hay-ho……..

I am not sure why there is this desire for what is substantially a rebuild;  even if all the materials and building practises follow the old traditional ways. but it does generate a lot of interest from visitors so maybe it is just me.

I tend to think castles should be stabilised and left as they are, such as is the case in the UK with the ones mostly built by that ‘Jumped-up Norman’

Leave a Reply to David A Lockwood Cancel reply